A book with a new slant on Jane Austen’s life and background…. 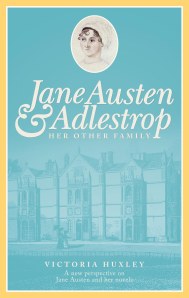 The story of Jane Austen’s links with the idyllic village of Adlestrop and Stoneleigh Abbey, the ancestral homes of the two branches of the Leigh family has not yet been fully told.  Jane’s mother Cassandra was a Leigh, a dynasty that boasted an Elizabethan Lord Mayor, ducal marriage alliances, a peerage granted by Charles I, eccentric Oxford luminaries as well as the spectre of lunacy and threats of bankruptcy.

Jane Austen stayed with her Leigh cousins at Adlestrop several times and kept in constant touch with events there by letter.  It was in Gloucestershire that she first heard of Humphry Repton who was employed by the Leighs and saw at first-hand how the eighteenth-century craze for improvements totally changed the village landscape. On one dramatic occasion she accompanied her cousin, the Reverend Thomas Leigh, to Stoneleigh Abbey which he had inherited — a legacy endlessly disputed and longed for by other family members — including Jane herself.

Jane Austen & Adlestrop opens up a fresh window on the author’s life and experience.  It examines the probabilities that Adlestrop Park, the Parsonage House and Stoneleigh Abbey inspired not only fictional places such as Thornton Lacey and Sotherton in Mansfield Park but also how the Leighs’ colourful lives and inheritance problems influenced many of the plot lines in Jane Austen’s books.

Jane Austen & Adlestrop is also a  portrayal of an archetypal English village’s journey from the eighteenth century, looking at how it experienced radical changes during Jane Austen’s lifetime and how it is now, over two hundred years later.

Click here for information on how to buy the book